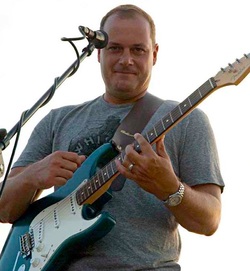 John taught himself piano and guitar at a very young age. As a child, John always found himself writing silly songs with catchy melody lines. He jammed off and on for years with friends, played songs at parties, but never had a band until college.

Upon recording solo piano pieces at Shorefire Studios in Long Branch, NJ, he found his passion and made a commitment to himself to write and record regularly. His latest solo recording Sweet Ali, is currently on iTunes and elsewhere.

In 2009 he co-founded the band Salva Vidas after meeting Dan Corboy at his daughters pre-school. Three years later he joined The Haven as lead singer and rhythm guitarist.  In addition to periodic solo gigs on guitar, John also plays drums in the Tower Hill Contemporary service.

His music has been played on the former 106.3 and most recently on 90.5 Brookdale Public Radio.  John has written over 30 songs and The Haven is currently working on their first studio LP.