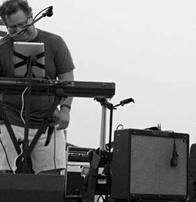 Jeff began playing piano by emulating his grandfather at the age of 8. At 11, he and his drummer friend Ian Carpenter, performed in front of a packed house at his hometown elementary school. By the time he hit 8th grade, he had the good fortune of being given a used Fender Rhodes and Hammond M101, both of which were slated for the garbage. In college, he returned to music by joining the jazz and concert band. His first taste of live club performance was in a rock band called Cold Storage in Newport, RI.

​In 1991, he paired up with childhood friend and The Haven bass player, Geoff Nicholas. Together they logged over 50 gigs with The Word and later Frogman. When those bands broke up, he continued playing with his uncle in the ATWB along with a number of acclaimed Jersey Shore musicians for over 6 years.

After a 10+ year break from music, Jeff reached back out to Geoff to gather the best musicians they knew to play for the KDM Race post-party at The Mad Hatter in Sea Bright. It was a great return to the stage with Bob Bandiera, Thom White, John Amabile and a host of other great musicians.  Shortly thereafter, Jeff, Geoff, Dan and John O'Neil asked John Amabile to join the band as lead singer and songwriter for the band. In April 2011, The Haven was formed!