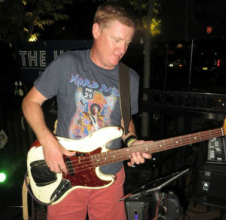 ​Like a number of musicians that Geoff grew up with his first ear opening musical experience came in Mr. Frank’s music class at Knollwood School. It was during record review one afternoon in seventh grade that he first heard Led Zeppelin and The Lemon Song. Shortly there after Bass lessons with John Frank started! Once high school hit he formed a number of bands with friends he continues to play with to this day including Jeff White the keyboard player for The Haven.

Over the ensuing years he was heavily influenced by the local Jersey Shore Music scene while working in just about every bar in Sea Bright. On one particular fall evening in the mid 80’s he first caught a performance by Dan Petraitis and his Soul Purpose band. The energy enthusiasm and fun that they were having entertaining the crowd that night at the Peninsula House has stuck with him and is something he brings to the stage whenever he performs. Geoff still owns the first bass he bought, a red Fender Bullet and breaks it out from time to time for his kids to play.


Current rig consists of:
In addition to his duties on bass with The Haven, Geoff man’s the controls of the bands PA. Anchoring the rig is: